The Inseparability of Providence and State 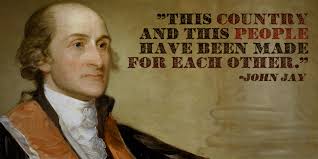 My missives to the people of New York in Federalist Papers numbered 2-5, included rhetorical references to “Providence” as the author of our constitution and our destiny.  In my day, this was equivalent to the more contemporary reference to a triune God- Father, Son, and Holy Ghost.  In the late 18th Century, the colonial print media and the vast majority of Americans unquestionably agreed that Providence and Natural Law were instrumental in the governance of our great nation.

You will note my previous post, on the subject of diversity, is consistent with the following quotation from Federalist #2- “With equal pleasure I have as often taken notice that Providence has been pleased to give this one connected country to one united people–a people descended from the same ancestors, speaking the same language, professing the same religion, attached to the same principles of government, very similar in their manners and customs, and who, by their joint counsels, arms, and efforts, fighting side by side throughout a long and bloody war, have nobly established general liberty and independence.”

Now, permit me to address another essential truth from the Holy Book of Isaiah, made even even more popular as lyrics in Handel’s Messiah dating from the mid-18th Century (around the time our Republic was being conceived).  Isaiah Chapter 9, Verse 6b, “…and the Government shall be upon his shoulder….”

When in the course of American events has this simple Biblical statement been invalidated?  Never! So, why then did our High Court choose to separate Him from the affairs of state in its landmark court cases, beginning in 1947?  If the government truly rests upon His shoulder, then its survival must necessarily depend on Him, the One who supports and lifts up our government.

The Everson, McCollum, and Engel supreme court cases between 1947 and 1952 propelled our republic down a course of religious separation, leading to the moral and ethical decline in governance, public education and American civilization in general.  Mankind was born into sin and, left to its own devices, will unite to rebel against God for an unholy purpose.  That is a principal reason why God divided mankind into tribes and ethnicities as detailed in Genesis 11, the story of Babel.  God clearly wants believers to unite with Him to achieve His purposes in this world, never to compromise on the principles given to us by Jesus in the Gospels.

I am encouraged that the 45th President of the United States is showing the moral courage and wisdom to follow the stated intent of Providence by formally recognizing Israel’s capital in Jerusalem, by restoring Christian traditions like saying “Merry Christmas” in public places, by reading excerpts of the Christmas story in his public speeches, and by putting Christian judges and justices on the federal bench.  Clearly, President Trump is being influenced by Providence and, like Nebuchadnezzar II, is being used by Providence to achieve His purposes in these United States and around the world.  Hallelujah!

Now, let us resolve to reverse the 70-year course of our federal courts by restoring the preeminence of Providence in governing the affairs of men. Let us restore the teaching of Christ in public schools to receive the blessing of Providence in our pursuit of education.  Let us compel our judges to follow the canons of Mosaic Law (particularly including adherence to the 10 Commandments) when deciding federal court cases.  Let us elect Judeo-Christian leaders who will honor Providence and seek His favor in governing our Christian nation.  In so doing, we will make America great again!

First Chief Justice of the U.S. Supreme Court; Author of several of the Federalist Papers
View all posts by John Jay →
This entry was posted in Uncategorized. Bookmark the permalink.