Republican In Name Only- RINO 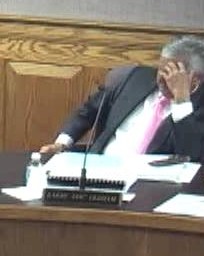 Were the people of America, with one voice, to ask, What shall we do to perpetuate our liberties and secure our happiness? The answer would be, ‘govern well, and you will have nothing to fear either from internal disaffection or external hostility.’

Alexander Hamilton in a Letter from Phocion, 1784

A primary election will be held in Lee County on May 8, 2012.  Five Republican candidates are competing for just three slots on the ballot for the general election in November.  One of the five is an incumbent Republican- Larry C. Oldham, who likes to be called “Doc.”  Doc is the subject of this post.

Normally, an incumbent politician has little to fear from competitors in a re-election bid, that is, if he has served his constituents well.  You see, the incumbent already has had success securing competitive office, has first-hand knowledge about the rigors of the office, has the advantage of instant name recognition, and often has a financial contribution advantage over the challengers.  Naturally, one would expect Doc to have the inside track in securing a seat for the general election.  But then again, Doc isn’t a normal Republican, he has a horribly liberal voting record, he is being aggressively opposed in an at-large bid that traditionally has not been contested, and this isn’t a normal election year.  Taken together, these factors greatly reduce Doc’s chances of making it out of the primary.

Here are just a few of the many problems that voters will have with Doc’s voting record: (a) Four times a 1/4 cent sales tax increase came up for a vote and Doc voted all four times to increase the sales tax; (b) Doc voted 17 times to give away corporate welfare as incentives to companies, totaling $1.8M  of taxpayer dollars, never questioning the loose contracts and questionable benefits from those giveaways; (c) Doc opposed hiring the audit firm, Evergreen, to perform a county audit and school system financial review- a project that eventually found potential savings of around $13M over five years; (d) Doc voted in 2011 to pave a ‘road to nowhere,’ a $250K state road project to extend Thomas Williams road into a pasture, benefiting some of Doc’s friends; and (e) on March 19, 2012 Doc voted against having the county manager plan for property tax relief in this fiscal year.

Now, it doesn’t come as a surprise that Doc has stopped coming to Republican events, that he provides no visible support or allegiance to the Republican Party, or that Doc receives most of his local support from Democrats and ‘Independents.’  Doc is fond of saying he could have become a Democrat or a Republican years ago: he made his decision about Republican party affiliation because his boss told him too.    In short, Doc is the epitome of a Republican In Name Only (RINO).

So, given his liberal voting record and lack of Republican identity, how is it that Doc expects to secure one of the three Republican seats for the fall election?  Good question.  Maybe Doc thinks he can buy the votes and influence he needs.  After all, dozens of good old boys are already changing parties from Democrat to Unaffiliated so they can vote for Doc in the primary.  These same good old boys are contributing to Doc’s campaign, just like they did back in 2008.  And with all that money, Doc should be able to saturate the county with campaign ads and signs, overwhelming his competition with spending.  But one thing Doc can’t do is run away from his record: it is stuck to him like his shadow.  His three conservatiove opponents – Frank Del Palazzo, Kirk Smith, and Max Dolan – all are running on a platform of accountability (something Doc’s voting record lacks).  And Doc’s three fellow Republicans on the present board of commissioners – Linda Shook, Charlie Parks and James Womack – all are openly distancing themselves from Doc.

Doc’s big gamble last year was to remain a Republican, rather than change parties.  His bid for re-election would have been much smoother and easier had he made the switch; especially since there were only two other Democrats who even filed to run for the three available seats.  In the opinion of the Founding Fathers- bad decision, Doc!

There is little doubt that Doc is going to be getting a lot of help from his good old boy buddies in the coming weeks; but will it be enough?  We think not.  Doc is toast with conservative voters, and there probably aren’t enough Republican and Unaffiliated moderates among the primary voters to offset the influence of conservatives.  No amount of advertising money and spin will cause Doc’s record to be suppressed.  Count on it.

First Secretary of the Treasury, Founding Father, and a leading federalist. I wrote most of the federalist papers, collaborating with John Jay and James Madison. Some in the Republican Party consider me the best ever Secretary of the Treasury. I was an original proponent for a strong central bank to help protect the financial security of our nation.
View all posts by Alexander Hamilton →
This entry was posted in Budget, Education, Lee County Politics, NC Politics. Bookmark the permalink.

1 Response to Republican In Name Only- RINO