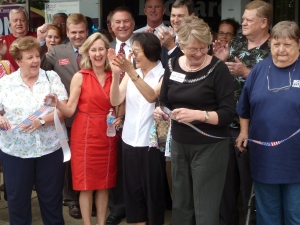 The Republican Party Headquarters officially opened its doors at its location on Moore Street, across from Depot Park, on Friday, Sept 17th.  More than 80 party faithful (and a dozen or so conservative Democrats) joined GOP Chairwoman Linda Shook in celebrating the start of the fall election season.  Keynote speaker at the gathering was Representative Paul Stamm from Wake County. 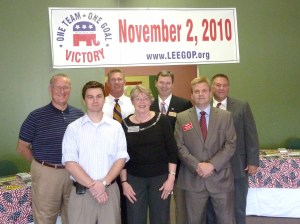 The headquarters is now open from 9AM to 5PM Monday through Friday through the November 2nd general election.  The facility is well stocked with campaign materials for most of the candidates running for local, state and national offices.  GOP volunteers can provide a wide range of services from this facility, from helping disaffected Democrats change their party affiliation to Republican, to helping citizens learn more about the candidates and their platforms.   This is an excellent place to come and discuss topical issues, to pick up campaign signs, or to volunteer your time in support of conservative candidates.

Of particular interest this year is the “Wall of Honor” that’s being dedicated to veterans, past and present.  This novel idea came from local financial planner Frank Del Palazzo, whose son Michael is presently serving a repeat tour of duty with the Marines in Afghanistan.    The idea of honoring our vets immediately resonated among GOP officials.  The facility’s largest room is now committed to service-related decorations and the largest wall will be adorned with photos, portraits, paintings, and other memorabilia of veterans from several generations.  Everyone in the general public, regardless of party affiliation, is invited to bring a framed picture or other suitable image of a family member, relative, or friend who served their country in the military.  A special area of the wall will be dedicated to those who, as President Lincoln so aptly stated, “gave their last full measure of devotion…” in the service of their country.  All drop-offs will be labeled and returned to their rightful owners soon after the GOP victory celebration, Nov 2nd.

A lesser known founding father of the United States, I hailed from the state of Pennsylvania and have been a physician, writer, educator, humanitarian and a deeply devout Christian. I am also the founder of Dickinson College in Carlisle, Pennsylvania. I was an early opponent of slavery and capital punishment. I was a professor of medical theory and clinical practice at the University of Pennsylvania. In some circles I am referred to as the Father of Modern Psychiatry. I signed the Declaration of Independence and was a participant in the Continental Congress. Originally, I mistakenly opposed Gen. George Washington and worked hard to replace him as the Commander-In-Chief because of the poor preparation of the Continental Army. However, later in life I supported this seminal American hero. In 1812, I helped reconcile the friendship of Thomas Jefferson and John Adams by encouraging them to exchange letters.
View all posts by Benjamin Rush →
This entry was posted in Election 2010. Bookmark the permalink.